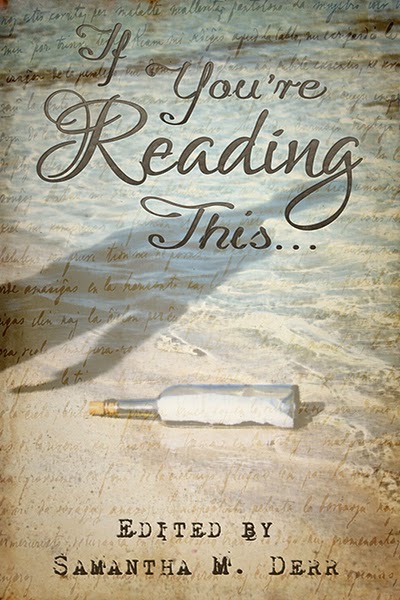 The first idea for Spring Tide hit me while watching the teaser trailer for the movie SEAL Team 6. In the trailer a group of men have the codename Whiplash and I immediately filed that away for a Zodiac Forces story to write some time in the future. At first I expected to write an M/M, up until then all I'd written was gay romance or erotica so it was less of a decision and more of an expectation. Somewhere in my head, a guy in the Cancer branch of my privatized military group had the codename Whiplash.

But the first scene that came to me when I started to outline this story changed everything. Not only is Whiplash a woman, she's not even a part of the romantic story. The tale I needed to tell was standing right next to Whiplash. Her down-to-earth partner Cardinal and the trouble they get into off the coast of Italy with a woman known as Wildflower.

I usually can't tell you what first inspires a story. It'll be an image, a feeling, a line of dialog or one of those Top Ten Acts That Will Restore Your Faith In Humanity lists you find all over Huffington Post. Any and all of these things float around in my head until two of them crash together and a brilliant idea that someone has already thought of is birthed in screaming light in the far reaches of my brain. If I'm lucky this baby idea latches onto a stray character, or brings one into being with it. Otherwise that thought sits in a file on my computer until such a character arrives.

So, while Whiplash wasn't the romantic focus of my new pirate adventure story, she was pivotal to its creation. She reminded me that heroes aren't always men and that princesses can rescue each other from the dragons of the world. From there it was obvious: Whiplash and Cardinal- a bond of friendship and cooperation- formed the basis of Spring Tide. And their mission, what was supposed to be a routine smuggling bust, became so much more.

Writing Spring Tide made me consider gender differently than I had before. I've always wanted to write about different relationships- lesbian, transgender characters, genderfluid, asexual- they all fascinate me. But I held back. I didn't want to do it wrong. I didn't know how to write a girl. Nevermind, that I'm female. I've never had many women friends and my brother and I joke that he received the 'girly' gene from Mom. I couldn't write a girly girl. I didn't know how. I didn't like them.

Until Whiplash came along, it never occurred to me to write a girl like me. Blame it on society or a lack of diverse representation or just me being dense - Spring Tide was as much a eureka moment for me as an author as it was a stretch out of my comfort zone. Drafting made me realize my own ingrained sexism. The gender of a character cannot dictate the actions of that character. I had to let go of the understanding that 'girls act like X' after all, wasn't I proof that not all of them did? Don't I have friends that break this mold?

Wildflower, Cardinal, and Whiplash don't solve each other's problems, they help each other solve their own. Strength isn't measured by how well you fire a gun or how many martial art styles you know- it's felt in how you struggle with those you love to bring them higher, and in doing so, lift yourself.

Spring Tide is a romp of an adventure story. Pirates, drugs, kidnapping and smuggling as far as the eye can see. There's buried treasure, gun fights, and high speed motor boat chases. Enjoy it in an afternoon with laughter.

Then come back to it when you want a story about real life.

Read between the lines and see how family ties can be the weakest of links, how the situations of life can overwhelm us, and how accidental discoveries can change entire lives. Watch a wretched situation get worse before it gets better. But it also see those same overwhelmed accidental princesses saving themselves from their fate.

Cancer is the watercraft-branch of the privatized Zodiac Forces. If you can float a boat, you'll find Cancer operatives on the water investigating. Whiplash and Cardinal are two soldiers off the coast of Italy, hot on the trail of an ivory smuggling gang.

Instead of ivory they find a message in a bottle calling for help. It's ten years old and the case is probably cold, but Whiplash knows a proper adventure when she sees one and Cardinal is along for the ride. It gets personal when the trail leads back to the very smugglers they were tracking. Both Whip and Cards are kidnapped and the woman who threw that message in a bottle locks Cardinal in the forward berth of the ship herself.

Was it a trap for the Zodiac women or does the lady pirate want out? Separated from her partner and supplies, it's up to Cards to keep it together and get herself free. If it means pretending to cooperate, even pretending to fall in love, Cardinal won't pull any punches.

It doesn't matter what hand she's dealt, this Cancer knows how to stack the deck.

The boys of summer are back in town and you know what that means! Ravenous Romance is  looking for stories of America's favorite pastime...well America's favorite two pastimes! Send us your sizzling hot baseball stories: M/F, M/M , F/F and any of its variations are welcome. Stories should be 2500-5000 words, 12 pt Times New Roman, double-spaced and in an attached Microsoft Word document. Send submissions to fidencia@literarypartners.com. Payment is a flat fee of $25. Non-exclusive rights for term of copyright — print, electronic, world, all languages. The deadline is June 1.
## 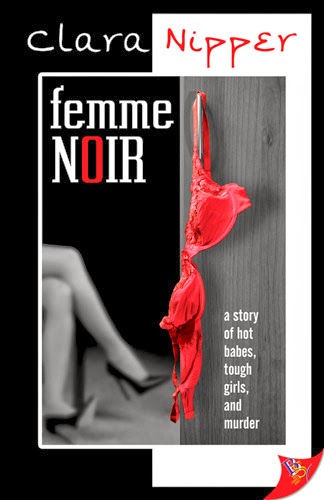 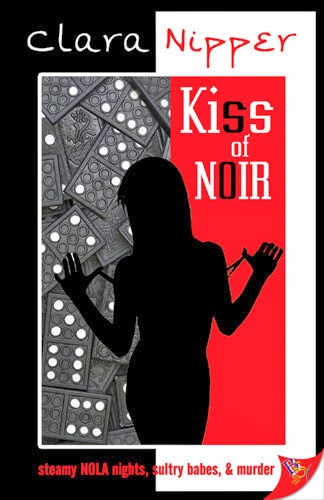 WHAT DRAWS ME TO MY CHARACTERS?

I have been invited to reflect on my latest work and to write about what draws me to these characters. As both my murder mysteries, Femme Noir and Kiss of Noir, are now on Bold Strokes Books’ backlist, I will discuss works in progress.
Murder on the Rocks  is a murder mystery that takes place in Tulsa during a catastrophic ice storm and the protagonist, Jill Rogers, is a seasoned detective who must work against crime and the elements.
What attracts me to this character is that she’s brave to the point of foolishness, good-hearted, gritty, mouthy, sexy, funny and irreverent. If she took herself or her job too seriously, I would first humiliate her and then have her killed. Sophie, Jill’s hot and cold love interest, would probably applaud that.
I create characters about whom I feel strongly. I never put someone into the story and think, “meh.” I love them’ I have them; I admire them; I want to punish or reward them. Sometimes even save them. When I wrote the scene in Kiss of Noir in which Cleo Sweetleaf got fatally shot, I cried and was upset the rest of the day. But Cleo was fine about it. He knew it was coming and was at peace.
Frequently (and I’ll deny this in a court of law), I’ll base characters on real people without their knowledge. So don’t piss me off unless you don’t mind showing up in a novel as a whiny, stupid, bag of slop with a teeny weenie.
In my other work in progress, At My Mother’s Table, it is a coming-of-age story, so the protagonists are children. I am drawn to creating very strong kid characters because of their play ethic and accurate world view. When something is not fair, it really isn’t. And sorry kid, no justice for you; maturity is when you can suck it up, tolerate and accept the dozens of not fairs that happen on a daily.
I enjoy writing from a child’s perspective-it comes easily to me because I don’t think we ever grow up. Our bodies change and we’re able to force ourselves to play house full-time, but inside each, we’re still the lonely kid on the playground with the weird lunch and high waters. It’s just a bigger playground. When my father returned from attending his 60th high school reunion, I asked his opinion of his remaining classmates. He said, “They’re just like they used to be; only more so.”
There. Even at age eighty, you’ll still be that same kid.
Clara Nipper writes fiction and blogs-www.claranipper.org. When not writing, she makes desserts, www.andyscandies.biz and enlarges her certified wildlife habitat gardens. Her two murder mysteries (Femme Noir and Kiss of Noir) have been published by Bold Strokes Books and are available at their website: www.boldstrokesbooks.com and on Amazon.com. She is a contributor to local publications: This Land Press www.thilsandpress.com and the Tulsa Voice. Clara also skates for Tulsa Derby League under the derby name Cat Owta Hell. With two Rollercons, countless clinics and boot camps under her jamming belt, it is safe to say it’s derby until death for this Jammer Assassin. Outside the rink, she has had roller derby articles published in Five on Five Magazine-www.fiveonfivemag.com, Hit and Miss Magazine-www.hitandmissmagazine.com.au/, USARS Magazine, Lead Jammer Magazine- www.leadjammermag.com, Blood and Thunder and Derbylife.com. Currently, her works in progress are two coming of age novels and another Tulsa-based murder mystery entitled, Murder on the Rocks. Find Clara at her website, on Facebook, Twitter (@mindybendy), Instagram, Tumblr, Pinterest, Linked In, Amazon Author Pages, Good Reads, Derby Social, Word Press and at the farmer’s market.
www.claranipper.org, www.catowtahell.com, www.andyscandies.biz
Facebook.com/clara.nipper and facebook.com/pages/cat-owta-hell
Twitter: @mindybendy, Good Reads: claranipper
Instagram: claranipper, Pinterest: pinterest.com/catowtahell/
Tumblr: Catowtahell, Linked In: Clara Nipper
Derby Social: Cat Owta Hell, Wordpress.com: Clara Nipper
Amazon Author Pages: amazon.com/claranipper, amazon.com/author/www.claranipper.org
Posted by Emily L. Byrne at 10:01 AM No comments:

First acceptance under this name!