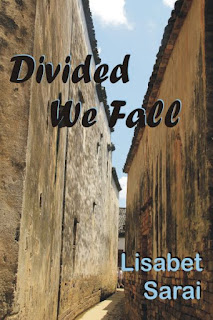 A note from Lisabet Sarai: This book includes racial slurs that might not be considered acceptable by some readers.  Using these terms was deliberate, and necessary, since they are symptoms of the inter-group prejudice and suspicion that provide the main conflict in this story.

Linh’s three year old brother has wandered out of Viet Village into Niggertown. Despite the danger, she has no choice but to go looking for him in hostile territory. She manages to convince the rifle-toting guard at the entrance to the black ghetto to help her search, using a mixture of bribery and bravado. As they comb the desolate streets of Niggertown, seeking any trace of Duy, Linh discovers that the barrio’s inhabitants aren’t necessarily the violent, drug-addled brutes she’s been taught to hate, and by the time Linh and Steel have rescued the injured toddler and spent a long night hiding in a derelict building, she has come to understand who are their real enemies.

It feels natural to move from eating to kissing. Giggling like kids, we lick the jerky grease from each other’s lips. His are full and plump, softer than Hai’s, but his stubble scratches my cheeks in a way no Viet man’s ever would. I seal his mouth with mine, tasting the sweet-tart remnants of his tomatoes. He threads his fingers through my hair, tugging at the roots while he consumes me. Each strand is a fuse, lighting firecrackers in my pussy.

I open to his probing tongue and give him control, at least for a while. Steel plunges deeper, thrusting hard, fucking me already though we’re still dressed. The thought arouses me so much I take back the initiative. Wrapping my arms around his neck, I use my weight to push him back onto the piled bedding. My lips slide away from his. I lap at his prickly chin, nibble along his jawline, plant tiny kisses at the pulse point of his throat. Gradually I work my way down his hairless, sticky chest, tasting tomato juice and sweat. When I run my tongue along the scar, he groans and grabs my ass, arching up to grind his swollen bulk against my clit. That makes me moan, at least until he flips me over and silences me with more kisses.

Hands in the darkness—my hands, his hands—fumble with zippers, claw at waistbands, shred the fabric we can’t push out of the way.  Finally, there’s skin and heat and hardness, his cock an apt fit to his name, sliding into my liquid center. He moves like a vast wave, surging, cresting, breaking inside me, then gathering power once again. I rock on the swell of his relentless, delicious rhythm. Sometimes I drift, letting the pleasure sweep me out to sea. Sometimes I fight, gasping for breath, drowning in raw sensation.

You’ll find information and excerpts from all Lisabet’s books on her website (http://www.lisabetsarai.com/books.html), along with more than fifty free stories and lots more. At her blog Beyond Romance (http://lisabetsarai.blogspot.com), she shares her philosophy and her news and hosts lots of other great authors. She’s also on Goodreads and finally, on Twitter.