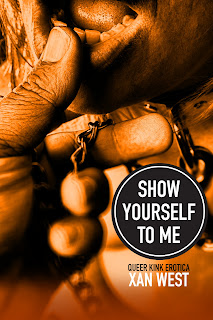 Where Matters: Writing Queer Public Sex
By Xan West
Where matters, especially for sex. It communicates tone, it illuminates connection, it shows character, it drives plot.  More than that, for me, where tells a critically important part of the story, because it places the sex, and the people having it, into a context that can be as vitally important as any other aspect of the tale.
I tell queer sex stories. To be more specific, I tell stories about queer kink. My stories are primarily urban, and they take place in queer contexts, queer community spaces. Place is one of the ways I root my characters inside a queer cultural context. The where of canonically queer sex is often a mix of shadows and light, of spaces that are secret and found only with insider knowledge, spaces that could be exposed at any minute to intrusion, public spaces that are bold and unabashedly in your face.
Patrick Califia’s story, “Big Girls”, is one of the best I know that really situates an erotic tale in a very clearly drawn community setting—the bar Jax is critical to the story, and feels like it is a character in the tale. In the afterword to Melting Point (the book that story was first printed in), Califia describes one of the themes of the book as “urban geography of sexual territories”, saying “community requires territory,” and goes on to talk about Jax as a prophetic community space that offered what did not exist in the current reality.
In my erotica, I document queer sexual geographies, and dream up community queer sex spaces that do not yet exist. Ones that I yearn for. For example, in my retelling of the Janet and Tam Lin fairy tale, I wanted to create a mythical visionary dream community space, the kind I would want to make my home, my sexual territory. In the original fairy tale, the place is called Carterhaugh; I wanted to create a Carter Hall that was my vision for community space, that centered queer and trans folks in a way that was intentionally desiring a wide range of trans and genderqueer identities, was intentionally and carefully accessible to folks with a range of disabilities, that had a strong and dominant presence of queers of color and an antiracist politic, that was multigenerational, where edge play was celebrated.
The story begins with the place. Before we meet either of the titular players, we meet Carter Hall.
“Carter Hall was known in certain circles. When the only three dykes from Albuquerque who were into blood sports made a pact to get over the break-up drama by going to IMsL together, Carter Hall was top on their list of places to go while they were in San Francisco. When the genderfluid fat activist from Santa Cruz stayed in Oakland for the summer, ze went to Carter Hall to cruise for the collective who made that now defunct, fat dyke sex zine ze used to drool over in the 90s. And when that butch boy/femme Daddy trans fag leatherati couple moved back to the Bay Area after all those years, Carter Hall was the first place they went the night they arrived in town.”

In “The Tale of Jan and Tam”, Carter Hall falls in that dreamy queer space between public and private, where you can catch glimpses of it, and then it slips through your fingers. Where you have to determinedly seek it out, as Jan does, unless you are an insider already. What a perfect place to set a genderqueer fairy tale retelling. I fell so hard for the Carter Hall I wrote in that tale that I set another story there. A story that could only have happened in a queer kink space that cared about access, that had an antiracist politic, that created space for a range of trans and genderqueer identities, and that celebrated edge play. I’ve never been to a place like that. I yearned for that place, so I imagined it into existence, if only between the pages of my new erotica collection, Show Yourself To Me.
That’s the thing about place: it makes things possible. I couldn’t finish either of those stories until I could clearly envision the geography, the queer sexual community in which they occurred.
I write stories that take place in alleys and parks, public dungeons and bathrooms, because those spaces matter. Because queers work hard to carve out spaces where we can be ourselves. Because sex that takes place in public, whether surrounded by others who are also doing queer sex, or a circle of voyeurs, helps generate a different kind of sexual energy, one that feeds and shapes the scene that unfolds. Because I love queer kink spaces and want to give readers glimpses of possibilities that they may seek out, and mirrors of the sexual geographies they know like the back of their hand.

Book Description:
In Show Yourself to Me: Queer Kink Erotica, Xan West introduces us to pretty boys and nervous boys, vulnerable tops and dominant sadists, good girls and fierce girls and scared little girls, mean Daddies and loving Daddies and Daddies that are terrifying in delicious ways.
Submissive queers go to alleys to suck cock, get bent over the bathroom sink by a handsome stranger, choose to face their fears, have their Daddy orchestrate a gang bang in the park, and get their dream gender-play scene—tied to a sling in an accessible dungeon.
Dominants find hope and take risks, fall hard and push edges, get fucked and devour the fear and tears that their sadist hearts desire.
Within these 24 stories, you will meet queers who build community together, who are careful about how they play with power, who care deeply about consent. You will meet trans and genderqueer folks who are hot for each other, who mentor each other, who do the kind of gender play that is only possible with other trans and genderqueer folks.
This is Show Yourself to Me. Get ready for a very wild ride.

The stops on the blog tour:
Bio:
Xan West is the nom de plume of Corey Alexander, a recent transplant to Oakland from Brooklyn, who has been doing community kink education for over ten years. Xan has been published in over 35 erotica anthologies, including the Best S/M Erotica series, the Best Gay Erotica series, and the Best Lesbian Erotica series. Xan’s story “First Time Since,” won honorable mention for the 2008 National Leather Association John Preston Short Fiction Award. Xan’s work has been described by reviewers as “offering the erotica equivalent of happy ever after” and as “some of the best transgressive erotic fiction to come along in recent years.”

I'll be offering two classes at the Loft Literary Center in February, 2016. Both are one day workshops, 3-4 hours long.

The first is "Inflagranti Delicto: Writing  Good Sex Scenes," offered on 2/13 (just in time for Valentine's Day!). This class will focus on building blocks for good sex scenes, integrating them into your plot and determining what purpose they serve in your story.
https://www.loft.org/classes/detail/?loft_product_id=160549

I'll also be offering "Lavender Ink: Writing and Selling LGBTQ Fiction." (2/27/15) This is a class for working with different kinds of fiction with queer protagonists and options for publication as well as ways to reach your audience.