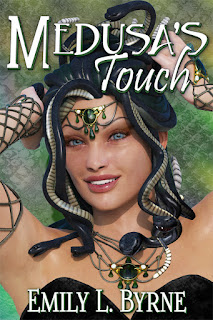 Blurb:
Medusa Pilot Captain TiCara X273, ex-street kid, former bondslave and veteran of the Corps Wars, thought she wanted nothing more than to be captain of her own starship. Or, at least, that was all that she thought she wanted until Sherin Khan came back into her life. A bar singer turned corporate rep, Sherin is now working for Ser Trin Vahn, one of TiCara's best clients and head of Vahn Corp.

Once they are thrown together on TiCara’s ship, TiCara and Sherin can no longer deny their simmering attraction to each other. A simple mission to transport the ailing Vahn to the legendary asteroid, Electra 12, for medical treatments turns dark and dangerous as betrayal leads to betrayal. TiCara's greatest enemy is pursuing them, there's a traitor on her crew and Sherin has a secret that can tear them apart. Can they learn to trust each other before it's too late?

MEDUSA'S TOUCH will be out in May!

Several years ago, I had a near miss with signing a three book contract deal with a largish romance publisher that went boom shortly thereafter in exciting and unpleasant ways. It was a "near miss" because I had a lawyer with publishing expertise review their contract and was counseled not to sign it as it was. The publisher wouldn't negotiate, I wouldn't sign, and that, as they say, was that. This was a crushing disappointment for me for a few months, at least until said publisher imploded horribly and a lot of other people's books were caught up in the resulting disaster. In the meantime, I drafted a novel from one of my three proposals. Then I rewrote it and sent it out for feedback and edits, then rewrote it again. Then more edits and more rewrites.

The short version is that I'm nearly done, the cover artist is working on artwork for it and I have a release date of late May, 2018 from Queen of Swords Press. The original plan was to release this book later on in the year, but I have a chance to get it into a book bundle in June so we moved it up.

So what is Medusa's Touch about? It's a far future science fiction lesbian romantic adventure with some erotic scenes. Or it's a space opera with some queer women and Pilot-Captain TiCara X273 is a lot of things: a medusa pilot who can pilot a ship that plugs directly into her brain, a former fighter pilot from the Corps Wars that wracked the galaxy, a former street kid from one of the outlying settlements, an ex-sex slave to the Ears, who serve as corporate spies and assassins to the highest bidder. The woman she's falling for, Sherin Khan, is a corporate rep, a former singer in the spacer bars and a woman with some big secrets. They're on a mission to take Ser Vahn, an aging corporate CEO to the asteroid Electra 12 for medical treatments, but there are a bunch of folks who don't want them to make it. Also, there's some hot sex. Have I mentioned that part? :-)
Stay tuned for more updates and the cover reveal!
Posted by Emily L. Byrne at 8:31 AM No comments: