Excited to announce that my tale of injudicious passion, "Phone, Sex, Chocolate,"  will be reprinted in Rachel Kramer Bussel's forthcoming anthology, CANDY LOVERS: SUGAR EROTICA! More updates about cover art and release date when I have it.
Posted by Emily L. Byrne at 8:39 AM No comments:

I'm participating in Lisabet Sarai's #CharitySunday. Want to play along? Leave a comment on this post between now and next Sunday (7/16), and I'll make a donation to Scarleteen at the end of the week. And if you buy my collection Knife's Edge, on sale at Smashwords this week, I'll kick in extra. I'd love to be able to donate $50, so please help me get there!

What is Scarleteen? Only the best sex education site on the web for teens, young folks and the rest of us. Learn about consent, birth control, gender, sexual health and other incredibly useful and helpful topics. I highly recommend it!

“C’mon,” Patty volunteered. “You might as well check out Grandmaster Flash.” My eyes must’ve bulged at the corners because they both laughed. Flash had his own fan club, horse struck gals like me who thought he was the prettiest thing on four feet. He’d earned the “Grandmaster,” too, winning just about every time those dainty hooves touched an arena.
“Patty’s Flash’s trainer, you know.” Hank said in a way that suggested it was no big deal, all the while making it clear that it was.
“Really?” I squealed, done with playing it cool. Flash was one of the horses I’d been hoping to see do his thing today. Not that his rider was any slouch, just a bit too straight for even my idol worship.
“Got a crush on the rider too or just the horse?” Hank grinned, elbowing Patty.
“Just the horse. And it’s not a crush.” I growled.
Patty gave me a wry smile that twisted the scar on her chin as she steered me around the corner. “Good thing. Beatríz only likes guys so you’d be outta luck there. Well, here we are. Flash, Molly. Molly, Flash. Give my baby a carrot.” She dropped a couple of small carrots in my now outstretched palm.
Flash was just as gorgeous up close as he was far away, all pure gold hide and silver-white mane and tail. He ate the carrots out of my hand with velvety lips and I rubbed his nose in cautious adoration. There was something else on my mind, though. “So how come you think I don’t like guys, too?” I don’t know why I asked; I usually trip anybody’s gaydar that’s worth the name.
Apparently that was an invitation. Hank stepped up so close to me that her breasts pressed into my back, then leaned in to blow very gently against the bare skin of my neck. “Lucky guess,” she purred, her lips just brushing my skin. I flinched away, breathing fast like a startled horse.
A quick glance down revealed my nipples showing hard through my t-shirt. The horse caught my mood and pulled away with a snort and a vehement shake of his head. Hank backed away more slowly and I could feel her grin at the back of my head.
That got me, can’t really say why. Probably I was just horny; it’d been a while. All I know is that I turned around and grabbed her, pulling her in for a long kiss. She tasted like peppermint and Coke, with just a hint of tobacco. Her arms closed around me like wire and bound me to her, holding me fast. I could feel Patty watching us and scared myself by wanting her to go away at the same time that I wanted her to join in.
As if she could read my mind, Hank broke the kiss and spun me around in her arms to face Patty. She held me close while she ran her tongue down the back of my neck until I moaned as softly as I could. Out in the arena I could hear cheering and stomping so at least I knew I’d be drowned out.
Patty reached over and grabbed one of my tits in her hand, her thumb rubbing it through the t-shirt while she watched me like she was wondering what I’d be good for. That was when Hank shoved her leg between mine and dragged my shirt out of my pants. “Not now,” Patty said firmly, jerking her head at the arena.
“Shit! I gotta ride in the next event,” Hank snarled, looking from her watch to the arena like a hunting dog on point. “Hate to let a good thing go to waste.” She flipped me around and kissed me hard, smothering any protests I was inclined to make.
When she was done, Patty chimed in. “I got an idea.” Hank let me go and I turned around so I could see the length of rope in the trainer’s hands. I shivered all over, soaking my way through my jeans.
“Yeaaah,” Hank murmured. She reached out to stick one of her big hands under my shirt, stroking and pinching until I thought I’d scream if I didn’t get something between my legs soon. “You ever been tied up, Molly?”

Get Knife's Edge: Kinky Lesbian Erotica for $1.50 at Smashwords, this month only! 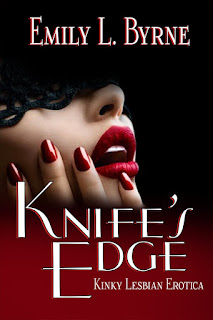