And is up and available at:

DESIRE is up for preorder!

DESIRE is up for preorder! It should be available for preorder on Amazon and other sites in the next day or two and will release on 11/26! #erotica #shortfiction #lesfic https://www.smashwords.com/books/view/758775
Posted by Emily L. Byrne at 8:22 AM No comments: 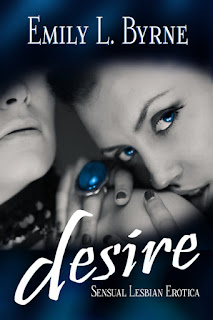 Table of Contents
Viva Las Vegas
The Further Adventures of Miss Scarlet
Summer Stock
Spoonbridge and Cherry
An Evening in Estelí
A Room with a View
Treehugger
Diplomacy
The Old Spies Club
Heart’s Thief
The Goddess Within
Excerpt from 'Treehugger":
The park ranger who found me was the most beautiful thing I’d seen in three days of tree sitting. Of course, that might have been because I was lying on a ledge right about where I’d fallen 2 hours earlier. I was all tangled up in my harness and I could barely move so she could have been bright blue with tentacles and I would have been overjoyed to see her.
As it happens, she wasn’t. No, she was brunette and curvy with dark brown eyes and lips that I would have wanted to kiss under other circumstances. Which these were not.
I still took a moment to appreciate the view, because I’m just that kind of gal. Not only was she hot, but she was wearing the uniform. That was my dirty little secret, something I’d never share with the other members of “Save Our Forests,” my affinity group: I had a thing for women park rangers. It might have been the hats. Or maybe those nice snug shorts they wore during the summer. Or the way their shirts hung over their breasts. I’d even admit to liking the belts and the radios and the whole butch persona, at least when I had a shot or two in me.
Right about then, I was longing for anything that might boost my courage as she climbed down and stood over me. “Damn. How the hell did you get yourself this tangled up? Anything feel broken?” She knelt down and started checking my arms and legs.
When she got to my ankle I gathered that rolling my eyes back in my head and turning green was almost as good as a verbal answer. “Sorry.” She gave me a charming grimace. “Okay, then. No walking down the mountain for you. I’ll go up top and radio for help. Back in a minute.”
I had just enough energy to reach out through the webbing and grab her wrist. “Don’t.”
She stared at me for a few seconds, and then followed my glance up the trunk of the breathtakingly huge old tree I’d been sitting in. My little platform was just visible from the ledge. That and the hazard tape I’d wrapped the tree in to mark it. “Crap,” she said at last. “Look, I’ll cut you out of the harness, but then I have to call this in. I think you’re hurt and it’s my job.”
“I’ve got to save the tree. If you call in, they’ll just arrest me and cut it down.” My voice was raspy what with how dry my throat was, but I knew I had to make her understand.
She stared at me for what seemed like five minutes, but probably wasn’t. Then she leaned back on her heels and looked up at the tree. Or, it occurred to me as I looked up with her, maybe she was looking at the massive storm clouds above it, the ones that seemed to have blown in out of nowhere in the last hour or so.
At last she sighed. That was when I registered the nametag on her uniform. It said ‘Sandra Rick.’ I met her eyes, “Ranger Rick? Really?” I asked. “I thought you’d be shorter and furrier.”
She rolled her eyes. Apparently that joke had made the rounds of the department a time or two. “Yeah, yeah, very funny.” She scowled and looked away down the hill, clearly weighing her options.
“You could help me get out of this first, then decide.” I pulled at the various nylon harness straps with my free hand.
“Or I could leave them on so it’d be less trouble to bring you in.” Her dark eyes glinted with an amused look that got my juices going.
My juices must have been what was doing the talking, given what I said next. “Oh, I could think of lots more fun things you could do with me, seeing as I’m tied up already.” Then I blushed, just to show how sophisticated I was.
Ranger Sandra (I couldn’t bring myself to call her by a raccoon’s name) looked a little startled, then intrigued. “How about you introduce yourself first?”
Oh yeah, that. “Cassie Williams.” There was giant clap of thunder overhead, like nature was giving me some accompaniment. We both jumped about a foot.
To be continued...