Happy Pride weekend! I've got a new guest blog up at Women and Words about writing my sexy new lesfic sf romance, MEDUSA'S TOUCH - comment to be entered in a drawing for a free copy!

Acclaimed lesfic author Cheyenne Blue loved my new sf romance, Medusa's Touch, and you might too!

For the next 17 days, you can get Medusa's Touch in this Pride Month StoryBundle which also features books by Melissa Scott, Geonn Cannon, A.C. Wise, Don Sakers, Alex Acks, Tenea Johnson, Jo Graham, Joseph Carriker and Dayna Ingram. We're raising funds for Rainbow Railroad, a Canadian nonprofit that helps LGBTQ+ folks escape repressive regimes. Celebrate Pride, get some great reads and do some good!
Posted by Emily L. Byrne at 9:24 AM No comments:

My sexy lesfic sfromance novel MEDUSA'S TOUCH is a featured title in the Speculative Fiction Showcase today!
Posted by Emily L. Byrne at 2:24 PM No comments:

Announcing "The Witches of Gloucester" by Lisabet Sarai 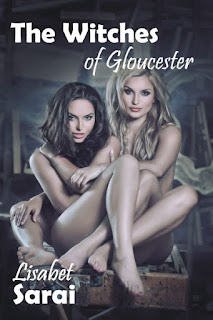 It’s not about power. It’s about love.

The historic port of Gloucester, Massachusetts has a special charm, due at least in part to its resident witches. For decades, raven-maned Marguerite and red-headed Beryl have lived among its hard-working inhabitants, making magic and mischief. Love and sex fuel their supernatural abilities, but duality limits their power. To reach their full potential, they need a third witch to complete their circle.

ONLINE EXCERPT LINK (X rated): http://www.lisabetsarai.com/witchesex.html
“Will she come, do you think?” Marguerite gestured toward the 1930’s brass Commodore clock on the mantel, which read ten minutes past four. “She looked so nervous yesterday – as if she thought we’d eat her alive.”

“Well, actually, when you put it that way...” Beryl allowed herself a lecherous chuckle.

Her companion gave her an exasperated grin. “This is not a joke. You know as well as I what is at stake.”

“Don’t worry, Mar. She’ll be here, though she may have to wrestle a few doubts into submission first. She feels the pull, just as we do, even if she doesn’t understand it.”

“Well, I do hope she arrives soon.” Marguerite surveyed the elegant table she’d set. She picked up a Blue Willow porcelain teacup and wiped away an imaginary smudge. “The icing on the petit fours is melting.”

As if in answer, chimes tinkled at the front of the house and a hint of fresh air slipped in the open door, bringing the ubiquitous tang of salt. From his corner cage, Marguerite’s mynah, Jonah, exactly mimicked the sound of the doorbell. Beryl jumped to her feet. “I’ll go show her to the parlor.”

“No, no – let Gloria do that. We don’t want to spook her with excess enthusiasm. Settle down and compose yourself. Remember, you’re a member of the Ladies’ Welcome Brigade. Refined. Polite. Proper.”

“Proper?” Beryl grinned and thumbed her peaked nipples, obvious as always through the navy blue crepe of her blouse. Her eyes fluttered shut as she relished the sensation. “Refined? Me?”

Marguerite licked her full lips. She swept her palms over the plum velvet caftan that hid her thighs. “Try to pretend, darling. Just this once.”

Sparks danced along Em’s naked skin in the wake of Beryl’s fingers. Naked? When had she removed her clothing? Her eyes fluttered open. Shadows hung in the opulent room, shaped by candles that flickered on the mantel. It was nearly midsummer. How could the night have come so quickly?

Embarrassment, wonder and need warred within her.  Arousal coursed through her body in shimmering waves, so intense it was almost pain. She found herself splayed nude upon the carpet, arms flung out and erect nipples pointing at the ceiling. Her knees were bent, her thighs spread wide in lewd invitation. Moisture seeped from her exposed cleft, dampening the silky nap of the rug beneath her.

Beryl knelt in the gap between Em’s legs, equally naked, her porcelain-pale skin gleaming in the dimness. Candlelight struck glints from her coppery crown. Emmeline couldn’t help staring at the matching tangle hiding the woman’s sex. She ached to part that auburn curtain and taste the moist flesh it concealed.

The older woman grinned. Mischief glittered in her emerald eyes. “Time enough for that later, girl. The first climax must be yours. Trust us. We won’t harm you. We just want to teach you who you are.”

We. The plural made Emmeline wonder about Marguerite.

“I’m here, darling.” The lilting, cultured voice came from behind her. Em twisted backward. Marguerite knelt just above her head, thighs parted, buttocks resting on her heels. The tawny beauty’s pubic curls were mere inches from her own silvery locks, releasing clouds of tidal perfume. Flawless butterscotch-brown skin stretched over Marguerite’s lush breasts and swelling hips. Sleek muscles shifted under the smooth surface as she leaned over to brush her lips across Emmeline’s.

Even that brief contact sent lightning sizzling to Em’s cunt.  For an instant she teetered on the edge of climax, before the luscious pressure subsided.

“Shall we take you, Emmeline?” Maguerite’s question wound its way into Emmeline’s consciousness, through a haze of lust. “You must ask us. The ritual requires it.”

LISABET SARAI writes in many genres, but F/F fiction is one of her favorites. Her lesbian erotica credits include contributions to Lambda Award winner Where the Girls Are, Ippie-winning Carnal Machines, Best Lesbian Romance 2012, Forbidden Fruit: Stories of Unwise Lesbian  Desire,  and Lammy-nominated Coming Together: Girl on Girl. Her story “The Late Show” appears in the recently released Best Lesbian Erotica 2015.

Lisabet holds more degrees than anyone would ever need, from prestigious educational institutions who would no doubt be deeply embarrassed by her explicit literary endeavors. She has traveled widely and currently lives in Southeast Asia, where she pursues an alternative career that is completely unrelated to her writing. For all the dirt on Lisabet, visit her website (http://www.lisabetsarai.com) or her blog Beyond Romance (http://lisabetsarai.blogspot.com).