Guest Blog Post: Author and Publisher Harper Bliss on "As Years Go By" 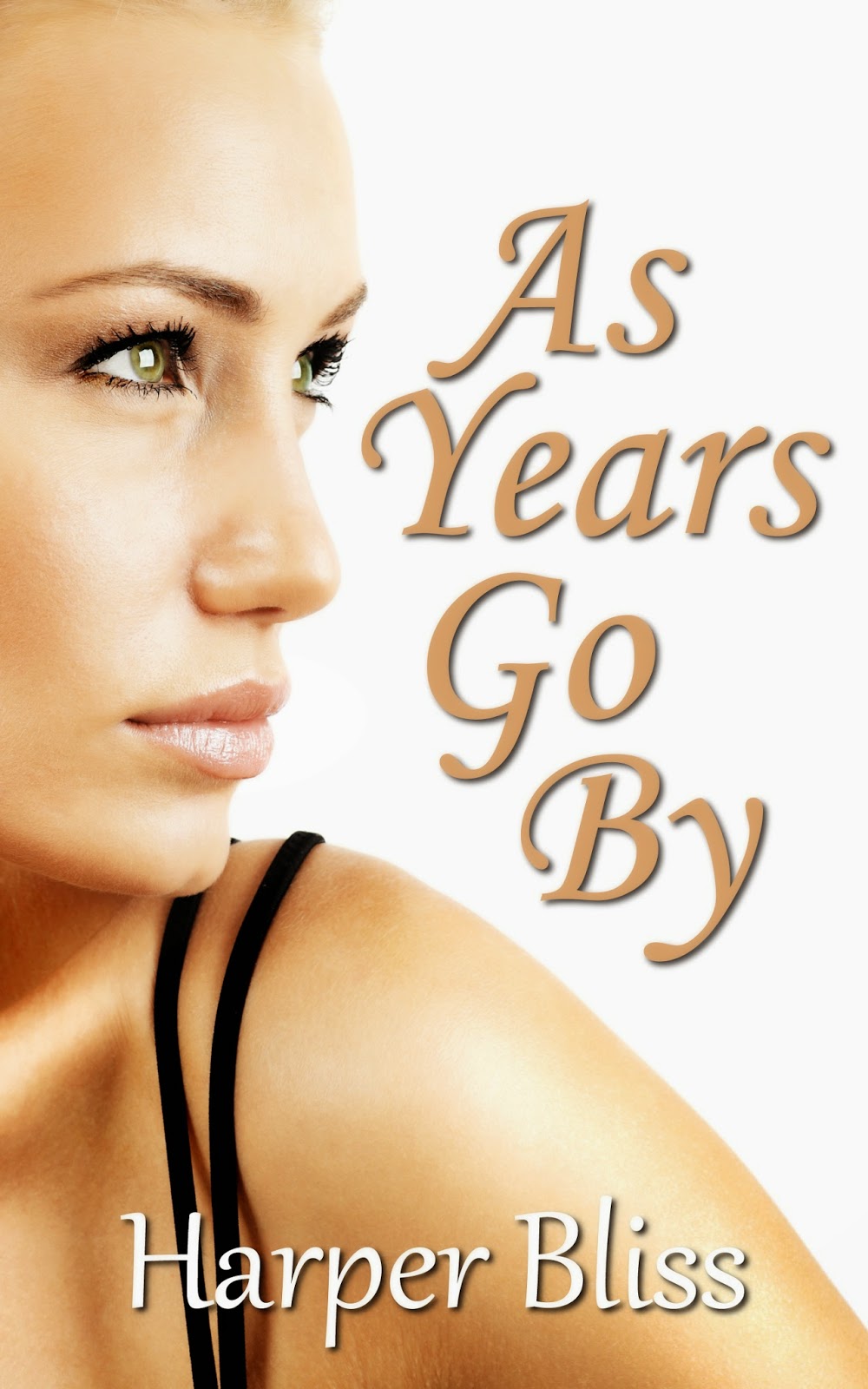 First of all, thank you for inviting me to your blog, Emily! It was also great to share the pages of Forbidden Fruit with you (and I do hope you’ll contribute to more Ladylit anthologies in the future, hint hint.) ;-)

I’m here today to talk about my latest release As Years Go By, a deeply emotional and rather dirty standalone novelette. After finishing the first season of my serial French Kissing and diving headfirst into a novel straight afterwards, I really felt the need to mix things up a bit and write a few shorter stories. As Years Go By was the first story I wrote after finishing some longer projects, and it completely took me by surprise.

I’m the opposite of a plotter, so it happens quite regularly that characters end up doing rather unexpected things, but both Jodie and Leigh (the characters around whom it all revolves in As Years Go By) have taken it to complete new levels in the surprise-me department. I blame my writing process, which has changed significantly since I first started.

I write in short bursts of twenty minutes during which I ‘go there’. ‘Going there’ is the term I use these days to refer to my state of consciousness when I start my clock (and my anti-social app) and just start typing like a mad woman. Depending on which kind of day I’m having (and how close I am to a deadline), I can produce from 400 to 700 words within the space of twenty minutes. (Yes, like most writers I’m obsessed with word count.) The key is to keep my fingers moving at all times (insert stupid lesbian writer joke here.) I go fast, and I don’t allow myself to overthink or (most importantly) censor anything. What comes out, comes out.

That’s how the things that happen in As Years Go By came to find themselves on the (virtual) page. I had a back story and a vague idea of what would happen going in, but a few of the actions Leigh and Jodie embark on are definite firsts for me in my writing. And I think it’s all down to effectively silencing my inner critic (because, basically, that’s what writing against the clock does most of all.)

Leigh and Jodie were lovers before. They’re exes reconnecting, trying to gauge if what drove them apart—despite their love and desire for each other—years ago is still valid. And they have everything but vanilla sex. ;-)

She parks her golden Lexus in the underground lot of the hotel and, when we get out, the sound our shoes make on the concrete sparks another memory. We’d gone to a dinner party on the Upper West Side and had by mistake—I believed—ended up in the building’s parking lot.

“Well, now that we’re here,” Leigh had said, hiking up her eyebrows the way she does, before slamming me against the wall and worming her hand into my pants under the harsh neon lights. The total surprise of it, along with the possibility of someone walking in on us, and the thrill of how she always so easily did what she did to me, had me trembling at her fingertips within short minutes. A climax I’ve always remembered.

When we step into the elevator I half-expect her to start kissing me there, but this is eleven years later, and all the boundaries we once carefully set have vanished, and when I look at myself in the shiny metal of the door, I see a different woman—outside and in. Yet, I want her to. I want someone to do that to me again. To take away all the things that always simmer somewhere in the back of my brain, to take away that longing that’s been building in my gut for years. And I only want Leigh to do it. She’s no means to an end. She’s my ex-partner. The only one who ever knew me well enough to take me to the place I needed to go. Because the things I want, you don’t just ask of someone. Or, at least, I guess you could, but it would take away half the pleasure.

The elevator cabin is silent, apart from a buzzing hum, and the sound of our breath, coming as regularly as always. Yet, beneath my skin, my blood is sizzling. I start making up a list of all the things this is not, but I realize quickly that I don’t need to. I don’t need to overthink this, or think about it at all. That’s the whole point of inviting her to my room.

The best part of this entire elevator ride, which is about to come to an end, is that I get to experience both sides of the thrill. I know Leigh and the familiarity between us reassures me; yet I haven’t seen her in years and there’s the excitement of newness crashing through my flesh as well. Do I still love her? I ask myself as we exit the elevator and I guide her to my room in the furthest corner of the hallway. Do I? If I do, it’s in a totally different way than before. The love that remains after the hurt has been dealt with. A more sedated, stable kind of affection based on memories and shared experiences and the life we once lived together but, no matter what we do or how hard we try, we can never, ever get back.

As soon as we walk into my room, which is swanky and large and boasts full-length windows on one side, Leigh starts scanning her surroundings. The curtains will have to remain open, of that I’m sure already, but she’s also looking for props. I wonder if I would be offended if she unearthed some sort of toy from her bag, a flogger perhaps, or handcuffs. If I would be able to forgive such presumptuousness. But not even Leigh Sterling can rise to that level of audacity, and I remember what she used to say to me. “You have no idea what you give me when you take the pain.” But I did, and I still do.

And here’s the blurb:

At her son’s graduation ceremony, Jodie unexpectedly runs into her ex-partner Leigh. Because of how painfully it ended between them, Jodie is taken aback at first, but gradually allows Leigh to draw her back in—just like she used to—and shock soon makes way for memories of the intense desire they once shared.