Getting a Clue and "The Further Adventures of Miss Scarlet" 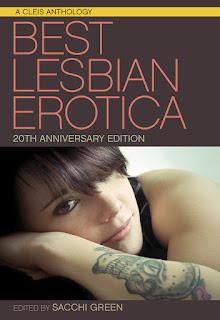 Welcome to my post for the Best Lesbian Erotica 20th Anniversary Edition Blog Tour! Our wonderful editor Sacchi Green has organized a series of these to celebrate 20 years of terrific lesbian erotica from Cleis Press. Check out the whole series here.

This marks my 9th appearance in the series, which is pretty exciting for me as a writer, and hopefully for you as readers! I've had stories in Best Lesbian Erotica 1999, BLE 2001, BLE 2005, BLE 2006, BLE 2008, BLE 2011, BLE 2014 and BLE 2015 and had the opportunity to work with Kathleen Warnock, Tristan Taormino, Laura Antoniou and a host of fabulous guest editors along the way. I'm so glad that Sacchi Green liked my story enough to include it in this year's edition.

"The Further Adventures of Miss Scarlet" first appeared in Cheyenne Blue's anthology Forbidden Fruit. Its genesis goes a tad further back to a cancelled lesbian noir anthology and an earlier version of the story that I didn't like as well. Truth be told, there were several versions of this story. For this one, I pared it down and reworked it from the original versions, but kept the two main characters: a notorious jewel thief (Miss Scarlet) and her obsessed foe, a police detective named Kendra McClain. Sparks fly when they get close enough to each other for a train ride that neither will forget in a hurry!


The smile widened, brilliant lipstick parting over bright white teeth. “You can call me Scarlet, Miss Scarlet, if we’re going to be formal.” She tucked the e-reader away in a small black bag that matched her heels, but she didn’t take her gaze away from Kendra’s face.


“Are we playing Clue? I’m not sure I want to be Colonel Mustard in the library, with or without a candlestick.” Kendra grimaced. She glanced down, this time looking beyond Scarlet’s body to her accessories. James always said that you could read a lot about a woman by what kind of jewelry she wore and how she put together her outfits. Kendra usually blew that off as his one concession to metrosexuality, but she was willing to make an exception tonight.
Everything matched, not a hair out of place, not a chipped nail or a makeup smudge. Everything this woman wore was assembled with such care and thoroughness that she might have been playing a part on stage. With one exception: one of her rings was a giant, gaudy bit of bling that didn’t match her industrial-style silver earrings, necklace and watch. The ring was a mass of ornate curlicues around a faceted glass stone that was far too large and shiny to be a real diamond.

“Nice ring,” Kendra drawled as the station signal beeped to let them know that their train was coming in.
“Like it?” Scarlet smiled at her upraised hand. “I--” And the noise of the onrushing train cut her off. But for one crazy moment, Kendra could have sworn that she said, “I stole two others nearly the same size in Monte Carlo last year.”
“What?” Kendra looked at Scarlet as closely as she could as she trailed the other woman onto the train. She reached for her phone, wondering if she could do a quick search on jewel thefts in Monte Carlo without arousing too much suspicion. But they were alone in the train car and headed into a tunnel, so there would be no signal even if she tried to claim a text message.
And they were sitting down and Scarlet was resting her hand on Kendra’s arm, caressing it, stroking it until Kendra, watching it, thought she might go up in flames. “You’re so very strong, Detective. I do like a nice strong girl.” Scarlet looked up at her through thick black lashes, her gaze an invitation.

Buy the book at your favorite store or follow the link for other options.